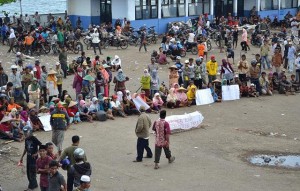 In the last five years the East Nusa Tenggara Provincial Government has taken a very accomodating attitude to mining development. Many mining permissions have been issued by the provincial and regency governments, for minerals such as iron sand, gold, iron ore, uranium, copper etc. Since entering the era of regional autonomy, NTT is increasingly tormented by the mining industry.

The development of the mining industry in East Nusa Tenggara is indeed astonishing. Since 2007, extractive industries have commenced activities in all parts of the island chain. The number of mining claims submitted to Kupang Regency alone stretches to 80 companies, most of which are already operational. In South Central Timor Regency 176 claims have been submitted, in North Central Timor 139 and in Belu Regency, 89 mining companies are operational. Meanwhile there are also the mines which have already been open for a long time, such as the gold mines in East Sumba, Central Sumba, Lembata, Manggarai Barat, Alor and East Flores, or the iron sand mining in East Manggarai, Sikka and Lembata. Several of these mines are even located in conservation forest.

However this development is being accompanied by widespread resistance. Open protests have occurred from the far east of Lembata to the far west of Flores in West Manggarai. The anti-mining movement has also spread to Sumba, Timor and Alor.

The anger of the movement resisting mining in East Nusa Tenggara has resulted in a heightened consciousness amongst local people about conditions in the mining areas and what is going on there. Wherever it takes place, mining only causes the loss of living space, of work, deteriorating health, loss of a healthy and functional environment, loss of educational opportunities, the destruction of natural resources for future generations and the loss of customary lands.

An awareness is growing amongst the people that the mining industry is a key strategy to kick people off their land and strip them of everything until all they have left is their physical strength as they are forced to work in industry. This view is growing amongst intellectuals and church leaders. “Mining never brings the people any benefits. The people should reject mining, and what’s important is that people should know that mining is a destructive evil, especially for communities near to the mine”, Father Simon, a churchman from Ende, has explained.

Meanwhile environmental activists have been developing criticisms of the supposed benefits of mining and the myths that surround it. The first myth is that mining is a capital-intensive industry without high risks, whereas the facts show that many mountains have been dismantled, many areas of land have been turned into holes, leaving environmental damage in its wake. The second myth is that mining brings prosperity to an area, whereas in fact Freeport in Papua has left the local indigenous people languishing in poverty, while trillions of Rupiah are stolen from their lands and taken away by the company. Similarly in Aceh Utara and Lhoukseumawe, where the centre of poverty is located right at the point where seven strategic industries operate, or in Kutai Kartanegara, where 700 mining permits have been issued and the focus of poverty is in and around the mining area.

The third myth is that mining makes an important contribution to the states foreign exchange earnings, whereas in fact the share coming from mining is only 1-3%. Fourthly, mining is supposed to provide jobs, but in fact people from local villages can at best only find work sewing sacks and suchlike.

They say that mining brings security to the people. But what people? Under the production sharing system 4% goes to the national government, 1.5% to the provincial government, 2.5% to the local government where the production took place and 2% for nearby local governments. The remaining 90% is taken away by the investor”, said Markus Tulu, an activist. Meanwhile for the general society which still hold on to their traditions and customary viewpoints, the main reason for their opposition to mining is that for the indigenous people of East Nusa Tenggara, land is their mother – the source of all aspects of their livelihood.

As Eman Ubuq, from Lembata island and the co-ordinator of the Lembata United People’s front has said.“For the people of Lembata, land is our mother that brings us life. We would prefer to die than to let our mother be raped by investors”.

[translated by Hidup Biasa from an article in Serum #3]

This entry was posted in Our News in English and tagged Hidup Biasa, Koran Serum. Bookmark the permalink.