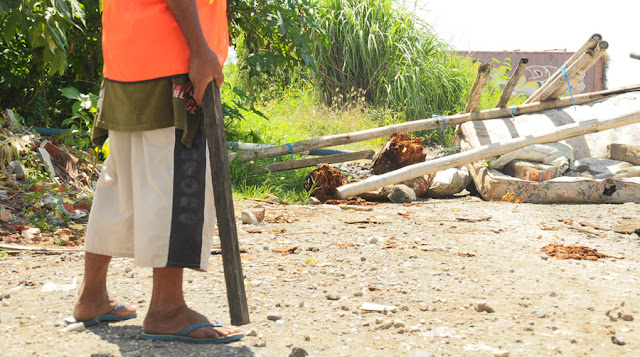 [a note from NEGASI: Since 2009, the resistance to coastal reclaimation in Manado Bay has escalated. On the front line of these actions are the traditional fisherfolk from different communities along Manado Bay. After the actions of fisherfolk from Sario Tumpaan and people from Kalasey beach, now the fisherfolk of Malalayang II are also showing their resolve to resist.]

At around 08.00 am, fisherfolk received news that mounds of earth on a piece of land owned by a doctor called Awalui were being moved towards the shoreline. Fisherfolk that gathered at the site realized that hired thugs and police from the Malalayang station had been stationed there to guard the work.

A call for solidarity went out to other friends involved in similar struggles at around 11 am. Several anarchists also got involved.

At the site, they saw that giant boulders had been placed right at the shoreline. The Malalayang fisherfolk, together with those who had come in solidarity, then went to stop the earth-moving work. Feeling outnumbered, the men hired by the owner chose to keep their distance from the fisherfolk and instead it was the police who confronted the masses. The police offered to negotiate, but this failed because the fisherfolk had one sole demand: that the work should stop.

At around 3pm the work finally stopped. Earth-moving machinery and trucks moved away from the site, but the fisherfolk continued to guard the coastline where work had taken place.

At 5pm, the fisherfolk dispersed, sure that the heavy machinery and trucks had really left the area. There was a tense atmosphere because of the possibility that the men hired by the landowner could still respond by attacking.

At around 11am, fisherfolk out at sea saw that the trucks and heavy machinery had started work again. Other fisherfolk went to check but they did not try to stop work because the work was taken place on land owned by someone else. That work continued until the afternoon.

As night fell, the fisherfolk were relaxing together, and news came in that work on the site had started again. It seemed that the material which had been piled up earlier that day was actually being prepared for coastal reclamation work that night

At around 8pm, the fisherfolk gathered and moved towards the work site. Seeing that material was really being moved into the sea, they called for work to stop. Feeling that they were being ignored, as work continued regardless, the fisherfolk chose to attack, using rocks that were lying around the beach. Their target was the heavy machinery being used to carry out the work.

In response to the attack, the hired guards and cops responded with their own form of terror towards the fisherfolk. But as they were outnumbered, the police and hired thugs decided to retreat.

Work stopped at around 21.30 in the night, but fisherfolk were reluctant to move on from the area because they suspected work would start again if they did not keep watch.

At 23.30, a group of fully-armed police came and took away one fisherman who they accused of provoking and leading the previous attack. Responding to this sudden arrest, news was spread around calling for solidarity.

The Malalayang fisherfolk, with those who had come to show their solidarity, then converged on the Malalayang police station, where their friend was being held. It became clear that the arrest had been illegal and without the necessary official document. Another fisherman was also arrested during the action to surround the police station, accused of being a provocateur.

By 1.00 AM, numbers of people were increasing. Tension was also heightened because people could see that the group of hired thugs sat with the police were now drunk. Several angry fishermen demanded the immediate release of their two friends.

Things started heating up as some cops got involved in a verbal fight with the fisherfolk and the others. A cop threatened one participant with his weapon, before news that the two arrested people would soon be released made the situation calm down.

Those arrested were set free at around 3.00 AM after being put through a process of illegal interrogation by the police. The people outside finished their action and dispersed.

There was a co-ordinastion meeting at 9.30 am, between the Malalayang fisherfolk and other fishing groups to make plans, analyse the situation and consolidate wider solidarity in the case that the police or thugs should carry out any further aggressions.

translated by Hidup Biasa from original post in Indonesian

This entry was posted in Komunike Internal, Our News in English and tagged Kalasey, Malalayang II, NEGASI, Nelayan Tradisional, Sario-Tumpaan. Bookmark the permalink.